I thought long and hard before publishing this post as I like to keep things relatively positive here but we can’t gather to talk about life and pretend there aren’t a few doomsday theories floating around concerning the year 2012. I checked Google AdWords for the words “2012 end of the world” and there were 550,000 global searches in the past 30 days. Seems it’s a topic we need to discuss.

So I did a Google search on the words of the title. These are the 5 top sites I found. (I skipped the “images” link- if the world is going to end, I don’t want to see it!):

1) Theend.com says this is it. Mark your calendar because according to this site the end is near.

2) Wikipedia presents both the eschatological and the New Age ideas. It seems cataclysmic events will occur later this year or a solar maximum or a black hole or an asteroid will do us in  or it’s a time of “positive physical or spiritual transformation” .

3) The National Geographic site debunks the six end of the world myths.

4) Nasa’s site too debunks the myths and sheds scientific light on them. Nothing to worry about folks!

5) If you’re inclined to worry, however, you might enjoy the end of the world2012 site. But wait! At the bottom of the page they conclude that the end of the world is not on the calendar for this year. But we’re still all going to die – sometime – as usual.

I think there is a little piece of us that worries and it’s not really a piece of us at all, but a fear we’ve inherited. We have descended from people who went through World Wars and the fear of the cold war. I was just a child when they were building bomb shelters in the sixties and my mother worried because she had three small children and two hands. I was a young adult when the movie “The Day After” aired on TV. My baby was just six months old the year the Berlin wall came down, and eleven years later we waited out a precarious New Years Eve together to see what would happen as the year 2000 dawned. I’ve had it with the worry. But I understand where it comes from.

What do you think about all this? Is 2012 the end of the world? Are you worried? What are your thoughts?

Scroll down to share your thoughts.
But first, please share! Thanks!
Previous: Do You Look for Meaning in Your Dreams?
Next: Why Do You Read? 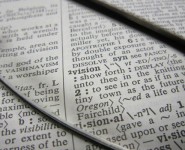 It’s Not the End of the World