And Your Name Is?

Our Guest Author today is Elena Patrice! You’ve seen Elena around LFI before. She contributes so sweetly to the conversation we had to give her the platform so we could learn more about her! She blogs regularly here! Take it away Elena!

People’s names both first and last intrigue me. I love to learn the stories behind them and what meaning they hold.  My mother named me Elena Patrice Barbuto (a nice Irish name). I was originally supposed to be Christine until another relative had her baby a few months earlier and nabbed it. I’m grateful though because my name is unique enough to be an ice-breaker. I was actually named after the song “Marie Elena” in Spanish (even though I’m Italian). Elena means “light” and is a rather popular name with Spanish, Italians and the Russians. Patrice is French and means “of noble descent”. This name came from the opera singer Patrice Munsel .  Long story, however, my middle name is now legally my last name – it’s a bit confusing for others at times.

When I was pregnant I hadn’t thought of any girl names because I was determined I was going to have a boy. Alas, I found out otherwise prior thankfully, and shifted my direction. Had my child been a boy his name would have been Aslan Dean (and I would have gone back to my maiden name of Barbuto). I chose the name Aslan when I was 13 years old. It was set in stone after watching an animated version of The Lion, the Witch and the Wardrobe and balling my eyes out for hours. I thought what a powerful, glorious figure Aslan was and what a unique, strong name for a child. I didn’t think that was the best choice as a girl’s first name; however, it was a perfect middle name. I named my girl Eve Aslan Patrice. Eve came quickly to me and it was the fastest, easiest child-naming ever I think. I didn’t seek the approval of others, I just knew it was perfect and to me, quite symbolic; Eve being the first woman created and first fallen and Aslan being a “Christ-like” figure with the courage and conviction.

What’s in a name? A lot I think. It’s our stamp on the world and there’s always a story. We like to make things our own and sometimes we “doctor” things up a bit by changing the spelling or how it’s pronounced.  In the blogging world there are many unique names that I often wonder about; bloggers like Marcus, Jk (love the upper and lower case), Hajra and Davina. Names often evoke feelings as well; “Danny” always make me smile, “Bill” makes me feel secure and comforted and “Betsy” makes me instantly like her.

So what’s in your name? What’s your story? If you could change your name would you? And if so, what would it be and why?

Scroll down to share your thoughts.
But first, please share! Thanks!
Previous: Do You Cry in Public?
Next: Are You in the Game? 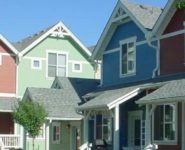 Cohousing; a Perfect Place for Community to Grow