Are You Following Your Inner Voice?

Today we’re happy to welcome Marcus Sheridan as our Guest Author! Marcus has been a regular part of the Life,for instance community from its early days. He blogs regularly at The Sales Lion Enjoy his story about listening to and following your inner voice. Take it away Marcus!

The year was 1996, and I was speeding along the mountainous interstate of I68 in West Virginia, headed back to college from spring break and rushing as hard as I could to return to the place I’d learned to love over the previous year since entering college. And as I was cruising along, eyes intently ahead, I came over a hill and suddenly noticed a car on the side of the road, apparently with a flat tire.

Suddenly, a distinct impression came over me that I should stop. But, being a 19 year old with many other ‘more important’ things on my mind, I sped on by, rationalizing in my head, “Whoever it is, I’m sure they’ll be fine.”

But as I continued down the road, all of the sudden a strong since of guilt came over me. At this point, I was feeling dumb for not stopping and my inaction was eating at me.

Within a few miles, an exit ramp appeared. I can remember thinking, “Maybe I should just take this and turn around…” But as we often times do in life, I again rationalized the car would be fine and the people in it would soon be on their way. So again, I let the exit, and opportunity, pass on by.

After a few more miles, a huge sense of guilt had set in. At this point, I was frankly mad at myself for being so short-sighted and selfish. Knowing an exit would not appear for another 10 miles or so, I assumed I had completely blown my opportunity.

But as I drove just a bit further, I noticed an ‘authorized vehicle only’ lane connecting the two sides of the interstate. Yes, this was my chance, and despite the fact that I’d now have to break the law, courage and determination had grabbed me. Before I knew it, I’d crossed to the other side and was speeding quickly in the opposite direction to the disabled vehicle.

Before this moment in my life, I can honestly say, for reasons I know not,  I had never stopped to help anyone along the roadside. And because of this reality, my heart was beating with anticipation as I had no idea as to what to expect. Soon, the car came into sight, and this time I noticed an older gentleman, likely in his 70s, standing outside of it, looking down at the flat-tire. Serendipitously, another ‘authorized vehicles only’ lane appeared and within seconds I had arrived.

As I walked up to the vehicle, I noticed an elderly lady sitting in the passenger side who coincidently reminded me of my grandmother. She smiled at me and informed me of their flat tire. I then introduced myself to the older gentleman and asked him if I could assist.

Well, it turns out that I could. In fact, the kind old man simply could not get the jack to work right, and had been fighting with it now for quite some time. So within a few minutes, I had the car in the air, replaced the tire with the spare, and found myself shaking both of their hands as they went along their way, smiling with sincere gratitude.

And even more serendipitously, as soon as I got in my car, the rain clouds opened up and it poured outside. Had I not finally followed the prompting I’d received, the old man would have been caught in the rain, without a clue as to how to fix his vehicle, and who knows how long they would have been sitting there.

As you might imagine, I learned quite a bit from this experience. More than anything, I learned about the power of promptings and impressions—and our need as humans to follow said promptings when they come to us. But, and maybe even more importantly, I learned that it’s never too late to listen to the internal feelings we know to be true, no matter how many ‘exit signs’ have passed us by.

With life’s many distractions, how have you learned to listen to that ‘inner voice’ and follow the promptings that come your way? And, has there ever been a time you’d like to share where you may have put these promptings off, but eventually found your way again?

Scroll down to share your thoughts.
But first, please share! Thanks!
Previous: May I Help?
Next: Challenges: How to Harness the Power 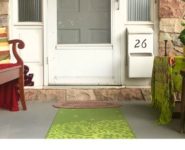 How Do You Achieve Balance in Your Life?